Last June 31, 2015 I was mesmerized by the little folks called Danboard nano “FLAVORS”. Actually I’ve seen them from an event last year I attended which made me really want them! They fit as nendoroid toys very well.

However, I couldn’t get it from the store I asked because it seems they’ve totally ignored my email about it so I just pushed through getting it  myself from AmiAmi since funds would come from my Paypal, and it’s been a long time since I bought something online. As usual, I had it sent with Registered SAL (Surface Air Lifted) that I usually choose anyway with my Japanese goods.

Come August 1, 2015 ~ I was expecting it would arrive as it’s been a month already. However, Japan’s tracking service stopped with that it was dispatched already from the first area. So, I figured I’d give it more days, maybe, 10 days or so.

In the second week of August, I began worrying though. So on the 21st of August I decided to drop by our local post office. There was an instance before that it already arrived 10 days after the delivery from Japan and I wouldn’t have known if I did not drop by. I had a feeling this is the same thing happening all over again. It seems like the mail man hasn’t been doing his job in sending off claiming notices in our area  (｀Д´)

Anyway, since Philippines’ online tracking is no longer working, I printed out AmiAmi’s email with details and all so I can show it to them at the post office, as well as the tracking number. It was a requirement anyway in claiming your stuff.

I stayed there for about an hour, uneasy, worried. However, what was instead given to me were email details for who I should contact because they apparently couldn’t find it. Oh noes :S This smells trouble!

Well, after a few days I finally emailed and also called. I gave up the first few days because there telephone lines were busy all the time. On the third day after trying calls, I didn’t notice they already replied to my email. OH YES! Finally, some hope! Good thing they did because now I was given a new set of telephone numbers to call which I called right away. This time, I got through easily and I’m very grateful for “Ms. C” for entertaining my questions. She told me to call up tomorrow again after she has traced my item. Since they’re doing all things manually it might take time. No worries, I can wait. I’ve waited this long!!!

She later informed me when I called back that my item had been dispatched there already (local post office, where, I stayed for an hour and yet they didn’t find my stuff, ugh). So, I decided to come by again the following week. It was then around September 7, 2015. I wrote down details “Ms. C” gave me, bill number and such. I was confident this time they’ll find it.

When I got there though, they still kept on looking through their logbook. I kind of admit how I have wished someone could have helped this guys get a newer technology tracking things, I mean, it’s 2015 already isn’t it?!

Anyway, as usual, they again didn’t find it. They even said that Pasay post office always say the stuff’s at the area like this and that but they’re not always accurate. After about almost 2 hours of looking through their logbook and puppy eyes of hoping to get my stuff. NOOOOO, they still couldn’t find it. I just then said I’ll call up at Pasay again just to check again.

When I called, “Ms. C” assured me she would just re-trace to be sure but she was already so sure but clueless as well why they couldn’t find it. More worries 🙁 At this point, I was already thinking what could be done if ever it would get lost or something. After all, I did have it sent via Registered SAL which is still covered. But a part of me is truly wishing it’s just there, I don’t mind if it’s been 2 months, just be there!!!

So, as “Ms. C” advised I should call up again by 3 pm. I couldn’t get a hold of her though because she was busy tracking stuff as well. No biggie, I have trust in her as she’s been really helpful in this process.

The following day, I called up again and she told me she got the same results. She was curious as to why people at our local post office is telling otherwise. I WAS TOO. At the back of my mind, like I always do, I’d curse them as to why they are being lazy and all and why couldn’t they find it when it’s there already. WHY?

But there’s still hope it seems!! Hooray! “Ms. E”, who was originally the one I was supposed to contact according to email reply I got before, together with “Ms. C” sent me documents I can show the local post office people that might help.  She told me to call after to give me instructions on what to do and what was in those documents. They also told me who the post master was in our local post office who I can talk to in case they still keep on denying it is there.

I skipped lunch out of worry that the search might take time and that I might have to talk to the post master and when I got there, I showed them my documents right away. The documents consist of proof that it was indeed dispatched in our city post office on July 7, 2015. Imagine that! It has been there already for 2 months and yet I didn’t get a claiming notice

This time, fortunately, one of the person who were there pointed out where it could be found. I guess the other two I was talking to were just assistants or something?! Had I known, I discussed it with him instead. He said, SMED items (includes SAL) are usually placed somewhere, not following its tracking number as the record for arrivals. Mine started at “RR”, so the two guys I’ve been talking to said they were looking through their records for items with tracking number RR. My item was at those items with “OP” tag which apparently stands for Ordinary Package I think. WELL. YES IT WAS THERE.

They said I was given a claiming notice as stated in my box. I didn’t at all receive anything! I’ve been at home all this time! How?!

They said, maybe I should be-friend our mail man. Well, I haven’t even seen him!! I would have if I did! Grrr. Anyway, I paid the usual fee, 100 PHP with no issues with tax and went home happily. HOORAY and FINALLY! Case closed! 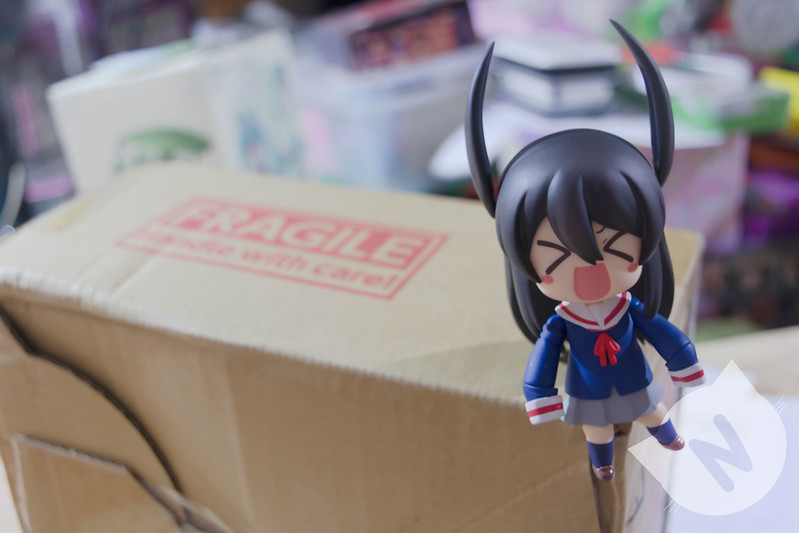 I’m really happy because part of the reason is I wanted to give a couple of the Danbos to some of my old officemates. I promised I would for them since I couldn’t get anything before it was my last day and all.

While it seems that this post is just about 1589 words, you have to believe me, the effort to get it is x10 worse. But it’s all worth it!!! And, I might not go online shopping for awhile, not because I’m not fond of AmiAmi but because Philippine customs is really hard to deal with. But that doesn’t mean that all of their people are corrupt or lazy, some are still hard working and aiming to bring good service. Some just need a nudge, some maybe, are just not too knowledgeable of what they’re doing.

I actually feared that it would be in Pasay instead, and that’s also scary. People in the main post office [Pasay] would put up your tax to double or already the same as what you’ve paid already, even if it’s really unexplainable, it’s true. I’ve been there!

I know we got to pay tax, but to change it without proper receipts is just way evil. 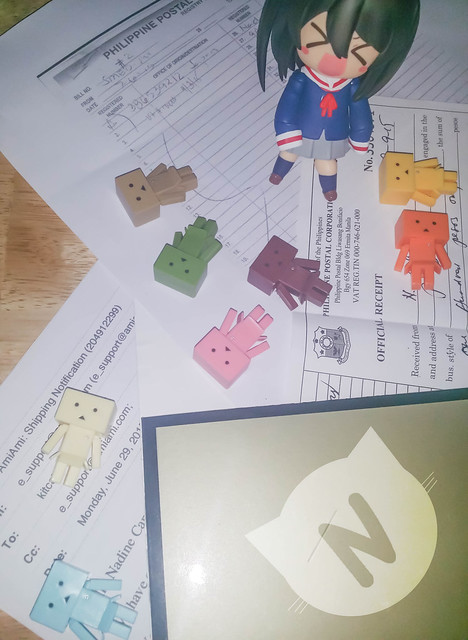 I printed a lot to have my own copies, just in case They want a copy and then later lost it or so. Sorry for the bad picture I got it from my phone cam bec. my DLSR’s battery died XD But hey, YAY DANBO!!!!

And also, it’s best to call them up! You’ll get the proper number to call for whatever support you’ll need since their main one isn’t really useful as it’s always busy. OR if you’re lucky maybe find someone who knows a person, who knows another person and a person within Pasay post office who can help you out. Some people really just wants gifts and friends sometimes ;P admit it or not. Especially here in PH >_<

That’s all! I hope this helps you out! Especially if you’re having problems with your packages here from AmiAmi or somewhere else from Japan.

My story of how I got my AmiAmi package that arrived 6 days after I bought it, but got into my hands after 2 months.

Hello to another year!